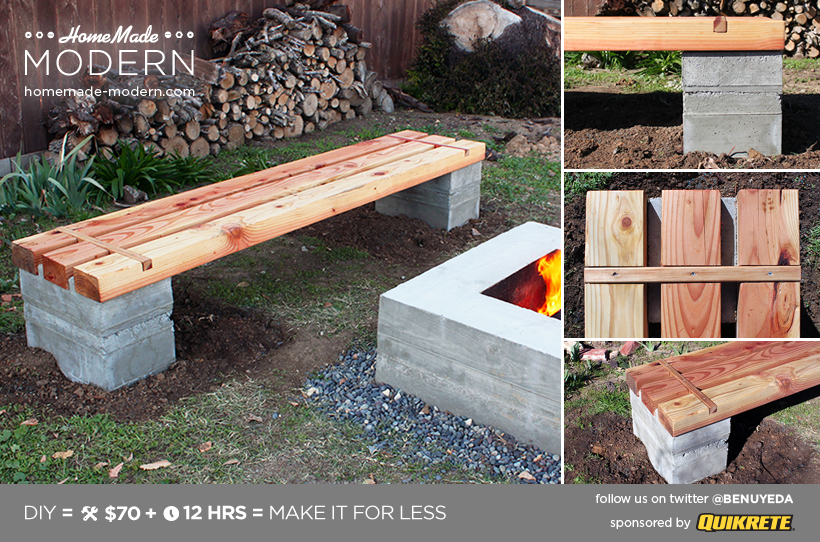 My parents wanted a bench to go with the concrete fire pit that I made for them. I decided to reuse the wooden forms from that project to make the bench. The bench consists of two blocks of concrete made of Quikrete 5000 and three 8-foot long 4x6s that I got from the Home Depot. Four 4x4s would have worked just as well. I did this project in Southern California, so frost heave isn’t a problem, which is why I was able to place the bench without digging deeper. The wood isn’t actually attached to the concrete, but rather sits within recesses in the concrete blocks. I'm thinking about making the bench L-shaped in the future, so I wanted to be able to disassemble it if needed.

Quikrete 5000
Available at Home Depot
QUIKRETE® 5000 Concrete Mix is a commercial-grade blend of stone or gravel, sand, and cement and is specially designed for higher early strength. This is the recommended concrete mix to use because of the high early strength and low price. It’s great for making tables, pavers, stools, and lamps and is typically found in 80-pound bags at Home Depot, but 60-pound bags are also available.

2x4s + 2x6s
Available at Home Depot or your local lumber yard
I salvaged 2x4s and 2x6s from the forms from the concrete fire pit project to use as the forms for each side of the bench.

4x6s
Available at Home Depot or your local lumber yard
I used three 4x6s to make the bench top, but four 4x4s would have also worked.

2x2
Available at Home Depot or your local lumber yard
I used some scrap pieces of 2x2 to connect the 4x6s together. I only needed about 4 feet and was able to use scraps.

STEP 1: Assemble the Panels
It's important that the two concrete blocks are the same size and that recesses for the 4x6s are aligned. I cut all the pieces at once using a circular saw. A compound miter saw would have made this a bit easier. Once all the pieces were cut, I assembled them into panels. STEP 2: Assemble the Boxes
The molds are just big wooden boxes with 2x6s placed in the bottom, which will create recesses in the concrete to accommodate the 4x6s. I left 1.5 inches of space between the 4x6s, but probably should have left 2 inches more so that the ledges were stronger. STEP 3: Add Bottoms
I screwed some leftover scraps of melamine board to the bottoms of the molds to keep the concrete from leaking out. Plywood would have also worked. STEP 4: Mix + Pour
I mixed the Quikrete 5000 one bag at time in a large plastic mixing tray. I used a shovel to fill each mold about 8 inches before adding in some wood blocks to keep the weight down. I made the wood blocks out of 2x6s and drove 3 inch screws halfway into them so that they would grip the wet concrete surface that I set them in. Then I waited 24 hours before pouring the next layer of concrete. I wanted to make sure the screw heads protruding from the blocks griped the first layer of concrete so that the blocks wouldn’t float up as I poured concrete over them. I mixed more Quikrete 5000 and filled the forms the rest of the way up, periodically using a hoe and a stick to push the wet concrete down into the corners of the forms. Since the top of the forms will be the bottom of the concrete blocks, I didn’t bother troweling the top surface. I just used a screed to level it once. STEP 5: Let the Concrete Cure
I let the concrete cure for 3 days to ensure that the concrete grooves where strong and wouldn't crack when I removed the 2x6s.

STEP 6: Remove the Molds
I unscrewed the wood panels and removed the molds. The middle 2x6s were stuck tightly in the concrete, so I set the blade on my circular saw to cut a sereies of 1 3/8" deep grooves in the 2x6. I was then able to chip out pieces with a crowbar, which reduced tension on the wood and allowed me to remove the 2x6. If you do happen to break off a piece of the concrete, just use Quikrete anchoring adhesive to glue it back on. 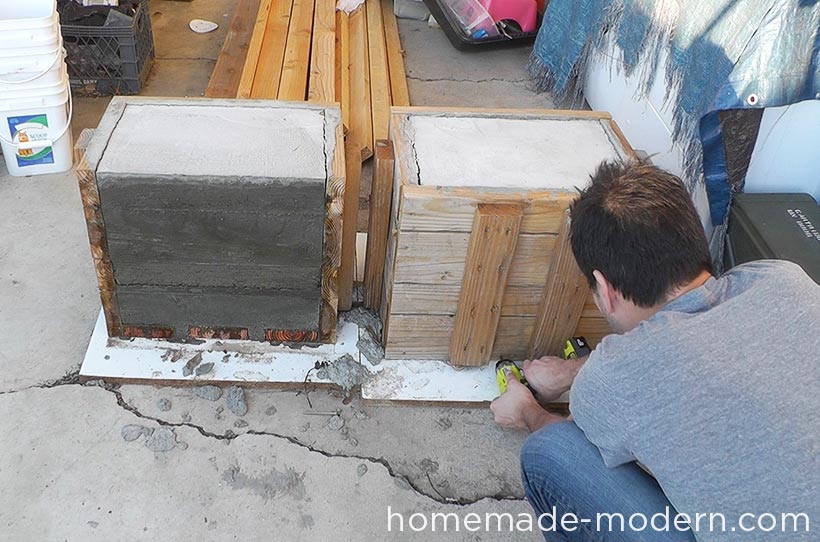 STEP 7: Place the Blocks
I dug down about 8-10 inches and stamped down the earth. Then I added about 3 inches of gravel to the bottom of the holes and stamped that down too. I wheeled the 160-pound blocks and wrestled them into place. STEP 8: Level the Bench
I placed one of the 4x6s and checked to see if the bench was level. It wasn’t, so I had to add a little more gravel and adjust one of the blocks until it was. STEP 9: Add the 4x6s + Sand
I placed the other 4x6s and sanded them down with an orbital sander and 120-grit paper. STEP 10: Cut Grooves for the 2x2s
I used my circular saw to cut grooves that would allow me to recess a short piece of 2x2 across all three 4x6s. I set the blade of the circular saw to 1.5" deep and clamped a straight edge to the 4x6s to make sure I got nice straight cuts. I used a hammer and chisel to knock out the wood chips in between the cuts. STEP 11: Cut + Screw in the 2x2s
I measured and marked the 2x2s to fit in the grooves and cut them to the appropriate length with my circular saw. I screed them into place with 3" deck screws and sanded them flush with my orbital sander. STEP 12: Finishes
I finished the bench with a deck sealer and moved the concrete blocks out to the edges of the wood for aesthetic reasons. 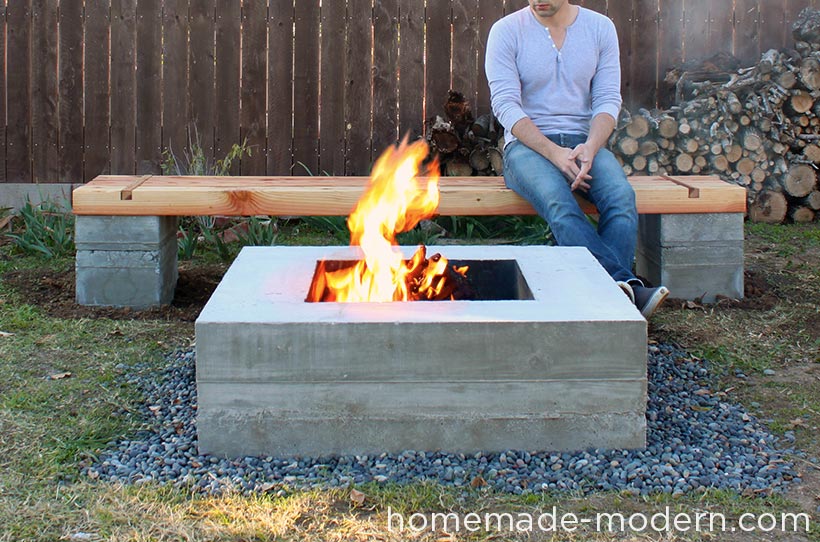 Good luck making your own outdoor concrete bench and please email or tweet photos to @benuyeda or ben@homemade-modern.com. For more detailed instructions, dimensioned drawings and different variations of the project, check out our soon-to-be-released book.